THE DESIGN BRIEF
There is an everyday migration of people from rural to urban areas because of various reasons. Most of the people travel in search for a job and better life style. At the same time there are some professions which demand that kind of traveling from places to places. There are people who have a business depended upon an animal or some kind of skill which is very specific to their community. Some of them carry their home with them, with their animals. Their home keeps shifting from time to time.

I would like to explore and understand the reasons and complexities behind this movement which makes one leave the space where he belongs to for survival and still he has to face this new identity of outsider in new space. I feel it’s necessary for me not only as a film student but as a citizen of this country to understand these changes happening around me.

BACKGROUND
Prabhu has been staying in Ahmednagar since last 7-8 years in a house which was abandoned while it was being built. He lives with his wife and father in law. He has a daughter who is 4 years old. He is basically from a small village near Indore, Madhya Pradesh. He has some land in his village but he prefers to do this business of Camels. They have been traveling from places to places. He was working in Bangalore, Pune, and Kolhapur before this. Camels are their only source of income. He has two camels. He and his father in law take them around the city and give small, small rides to kids. They also provide camels for special occasions like marriages and rallies. Recently his son, Atul who is 6 years old and sister’s son, Vicky-9years old have joined them. Both of them go with their grandfather for camel rides business everyday. They prefer to work in this line than going to school. Vicky has traveled to Karnataka, Madhya Pradesh, and Andhra Pradesh with his family and their camels. His native place is Gulbarga in Karnataka.

SYNOPSIS
My film is about two kids Atul and Vicky who come to the family for few days and become helping hand for Prabhu and his Father in law. Atul and Vicky go with their grandfather for business everyday. They like to be in this new place, but both of them have to leave to their respective villages within 2-3 weeks time. The film will be an observational documentation of these changes happening with the family.

RESEARCH QUESTIONS
>What are the reasons behind this movement of people? What makes one leave their land and move into some alien space?

>How does one deals with the new scenario in new space?

>Is it just money which drives people to change places or there is something more to it?

>What is that internal force other than money which keeps one moving from one place to another? How does it change children’s perspective about notions of education in society?

>What does one dream once he is out of land where he belongs to? Does he dream of going back or moving somewhere else? When is that time to go back to one’s home?

>Where do these kids belong whose parents also don’t have a specific place to return?

>What is this idea of belonging to some space and culture? How much one would like to accept or adopt some other language or culture?

>How does Politics on the basic of caste, class, region and language play role in their lives?

>Where do I stand in this kind of situation where I am also one of those who are going away from their people in search of something?


III. APPROACH/PROCESS
I have been spending time with the family since last 5-6 days and also started taking my camera along with me. I have got permission from Prabhu to visit them sometime in the day for a month. I plan to focus on two kids as main characters. Atul will be leaving anytime soon and Vicky will go in 2 weeks.

Mostly I will be there as an observer, and at times I plan to interact with Kids according to what is happening around. There will be journeys with kids wherever they go for their work within the city. I will plan and shoot according to my level of interaction and possible narrative. I might travel with one of the kids to their village if I get permission.

IV. LEARNING OUTCOMES
It’s a personal journey for me. As much as I will know few things about this complex structure of movement, I expect to know myself as to where do I stand and change myself according to the expected and unexpected situations. I will also know if I can make a film as my research proceeds and as I encounter different situations.
Posted by avinash deshmukh at 10:53 PM No comments:

Excuses about not updating the blog...

So the problem was I never got internet connection on that Monday.

and most important is Permission to shoot in the factory didn't happen. I got the permission only for 4 days, which was just like a joke after so much running around for that permission.

But while researching and meeting people who are migrants from other states, I met someone and my characters have changed little bit because of that. Visualizing the film, I guess it would be completely different than the previous factory location film and also this new space is more exciting to work with. I am sure I will learn few things about life?...while working with them. I already learned few things about getting permission to enter any space.

So I am copying my refined project proposal as I don't know how to Put word document file on the blog keeping it as word document.
Posted by avinash deshmukh at 10:41 PM No comments:

I don't have access to internet at home. I will get it by monday so that I can update my blog every day.
Its a different experience to go about making a film in Ahmednagar. I try to explain relatives, friends and other people around me what I have been studying and what I plan to do for diploma Project.
I wonder how my parents trust me so much, they never ask me a single question..anyways.
Somehow film occupies my mind 24/7 when I am at school in Bangalore but it doesn't hold the same intensity here. The city(or a small town) and things happening around seem to be overpowering sometimes.
One is not so lonely most of the time to ponder upon something which is easy to do when you are in design school, but its very exciting to work in a invironment where every system works with ' Sam, Dam, Dand, Bhed' on your face. Power seems to be the most issential thing.
I have been trying to get the permission to shoot in a factory which makes alluminium products. 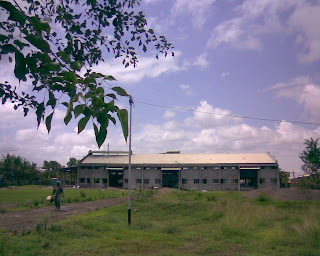 i have managed to get the permission from the owner but now people who actualy work there(manager and some important people in that space) have lots of doubts. I have to convince them that this project is for educational purpose and the footage from there wont be misused by me and college also. Monday I have to give my details. So that they have some proof of me being from this place and they will be able to contact my home etc if there is any problem.
One of the lady who handles all the things in this space told me that, they don't even allow people to enter and see what happens behind their gate and those walls around the factory.
I had to go with my friend as his brother in that space when I went first time. So now the funny thing is I told owner that my friend is accountant in your company and people who actualy work there know the different story. So today the lady who is incharge asked me my Sirname, my caste and then she had a doubt that how is my cousin brother is not from the same caste as mine. Monday I have to sort out these small small things. 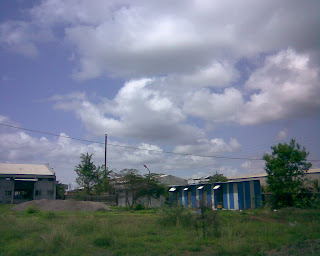 This is the place where all the migrated workers stay. They work there and then go to their home which is inside the same campus. Workers are not allowed to out on weekdays. Only on sunday they get to go outside of that campus.
They have one more factory which is liitle away from this one. Its bigger in size. I couln;t take out my camera there. That space is under surveillance.
Posted by avinash deshmukh at 8:54 AM No comments:

Following are some of the points which came up in the discussions:
>Form or narrative of the film- can be just observational, interactive,
Process oriented, essay film, character study,
Study of a community,
>Research on existing material in video medium.
>Readings which can help to articulate the issue in more details.
>What are the patterns in migration after independence and now?
>What is the politics behind this movement-economic, social side of it?
>Who holds the power to make it happen?
Visual map of the things related to migration and where do I stand in it?
>How the language of cinema can be used to tell the story in certain way?
>Is there a target audience? If yes, how can it change the way medium of video is
treated?
>Is it possible to use the existing footage to tell the story?
>Why documentary? How it’s going to change the process of making a film?
>While shooting I should have a clear direction. The film doesn’t happen on
editing table.
>Where does the complexity lie and how can I try to reach till there.
>Thinking about the style, form of the film.
>Keeping in touch by mail and keep informing about the process.

I feel I need some time to get used to blogging and all...
by tomorrow i will start putting up something.
Posted by avinash deshmukh at 9:43 AM No comments: